Kemaro Island: The Place where The Love Story Ended

In Palembang, the capital city of South Sumatera, there is a unique tourism object that I call as the mini version of Samosir Island. The actual name of the place I meant is Kemaro Island.


I don’t say that without no reason, there’s something similar between them, the location. The difference is Samosir Island located in the middle of Toba Lake, the biggest lake in South East Asia, while Kemaro Island is located in the middle of Musi River, the fifth longest river in Indonesia. You may say that what I compared is too far, but at least that’s what I think. You may disagree with that. 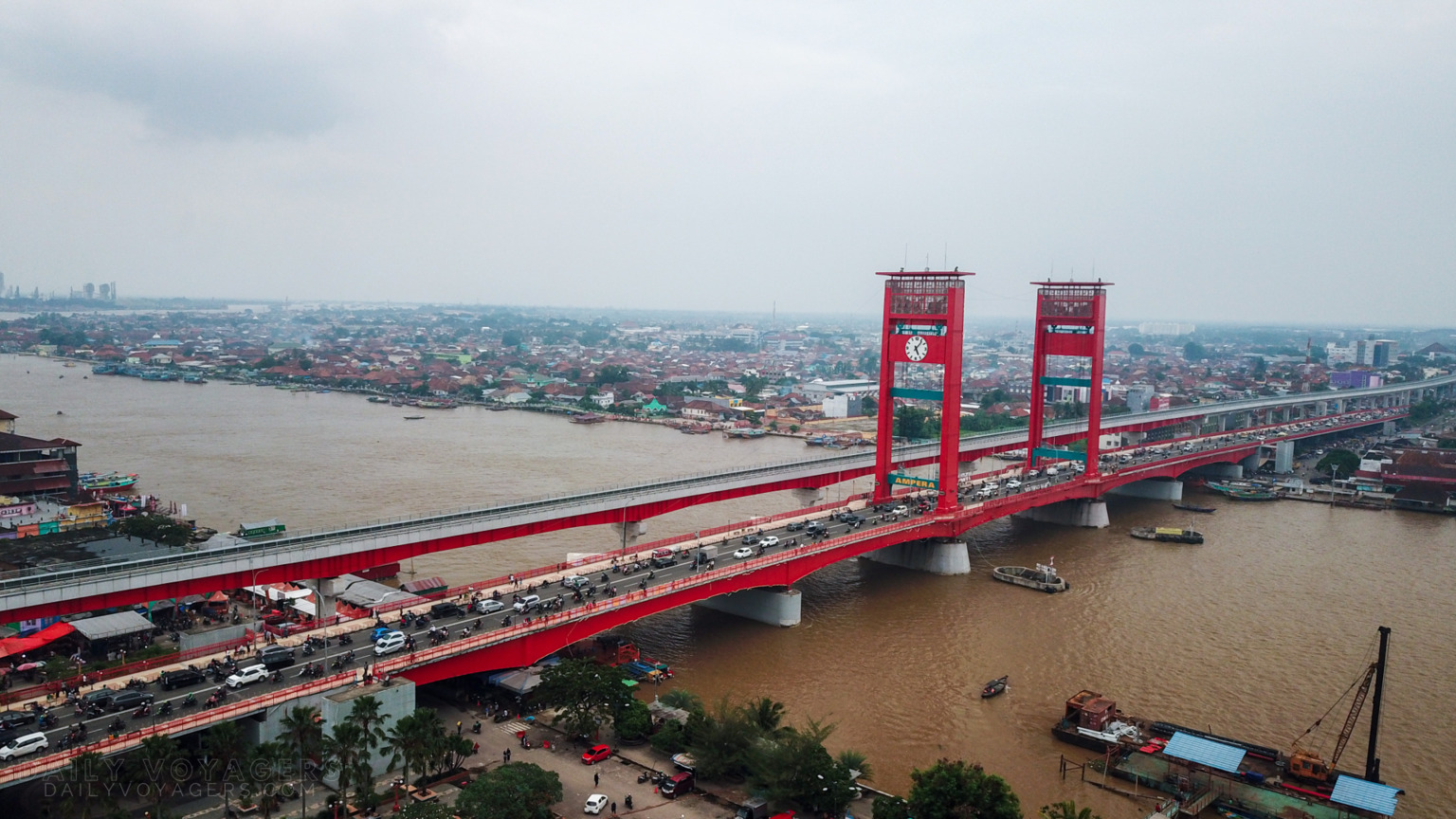 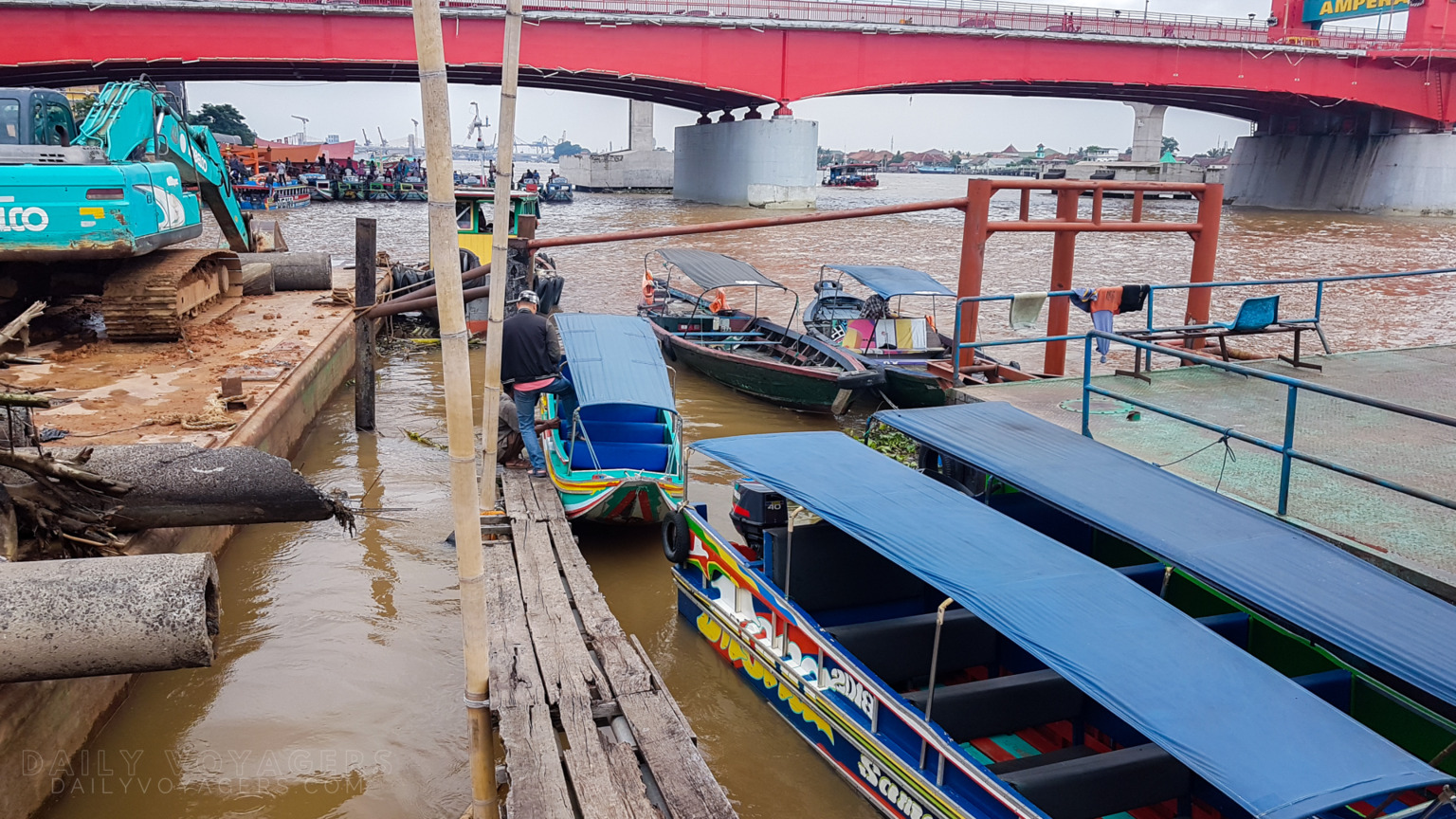 Traditional boat we used to go to Kemaro Island 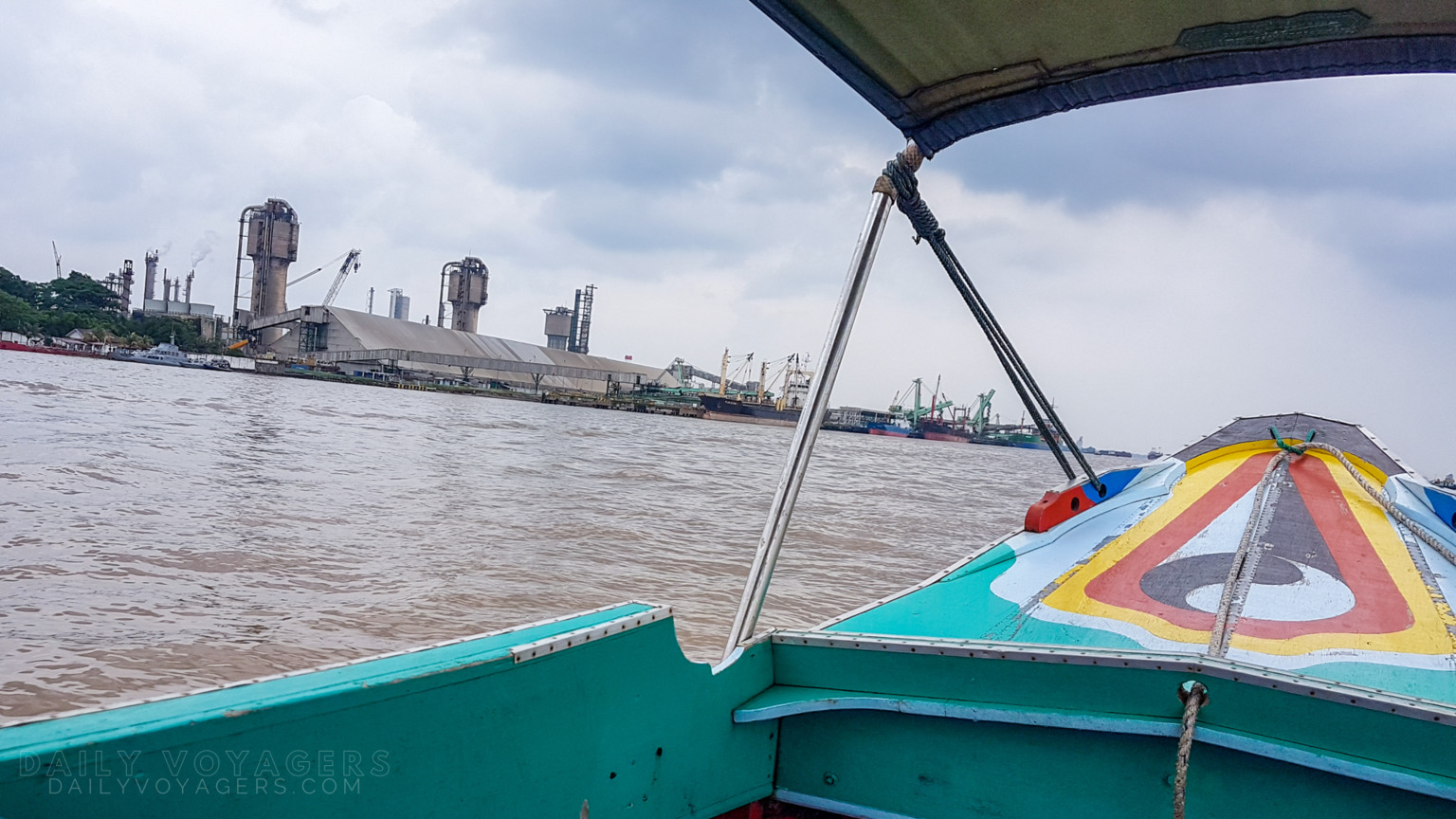 The view from the boat 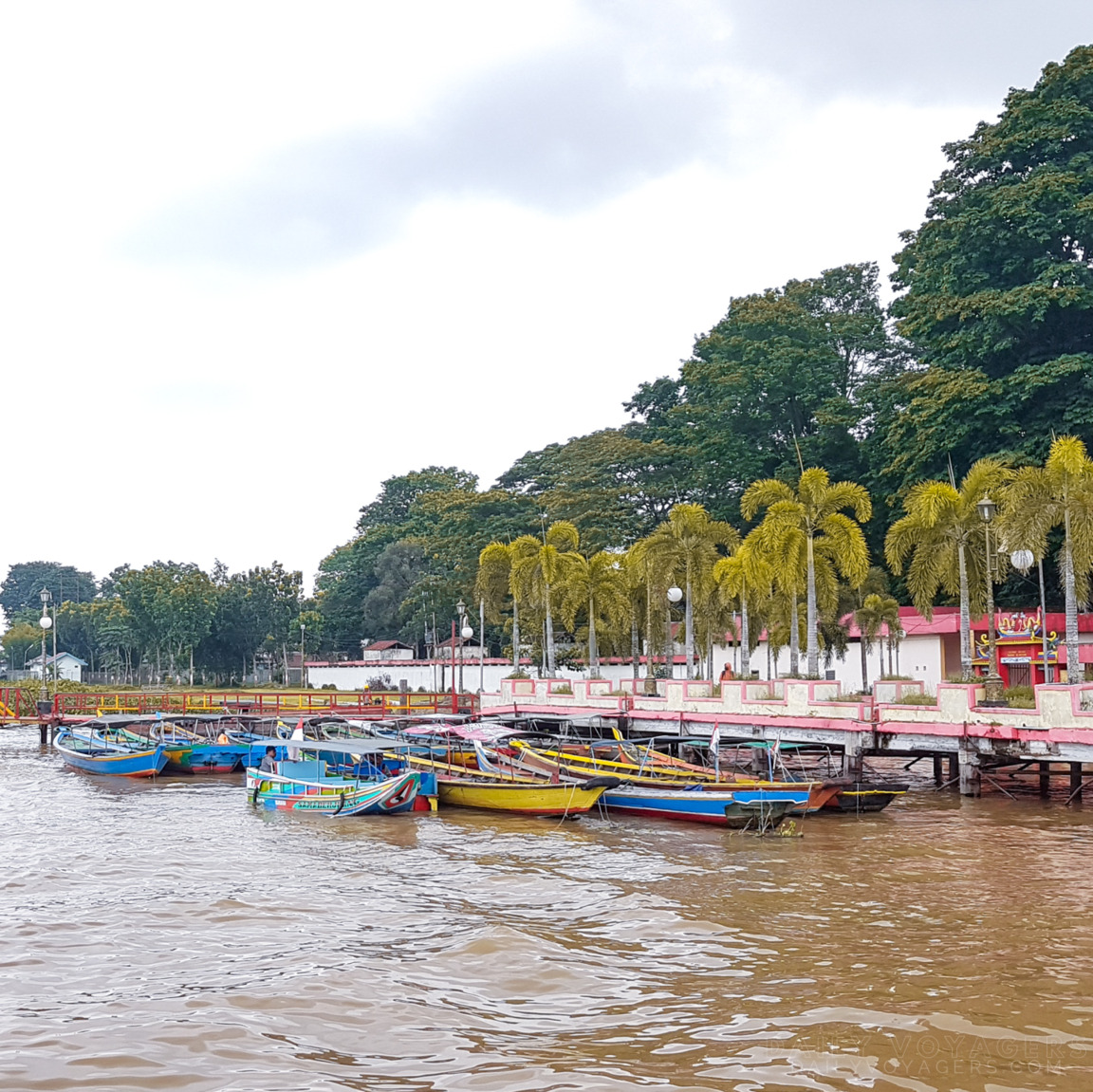 
So once I stepped on Palembang, without any hesitation, I asked my guide who is also my friend, Deddy Huang, to take me to Kemaro Island. And when we got there, we met an old yet charismatic guy with his short white hair after passing the main gate. I knew he was the real deal, so I approached him, introduced myself, and then I asked about the story of this Island.

And like a dog with two tails, the old man told the story that I asked. And here is the story …….

Hundred years ago, there was a beautiful princess named Siti Fatimah. She was a daughter of the king of Palembang kingdom at that time. Besides being beautiful, she also had a good character, polite, and how she spoke to others showed how smart she was.

The beauty of Siti Fatimah absolutely made her had many admirers, especially men. Unfortunately, there was no man who had any balls to approach her and then taking her as his wife. Why it happened? Because she came from a royal family and her parents wanted her to get a spouse from the same level (wealth). 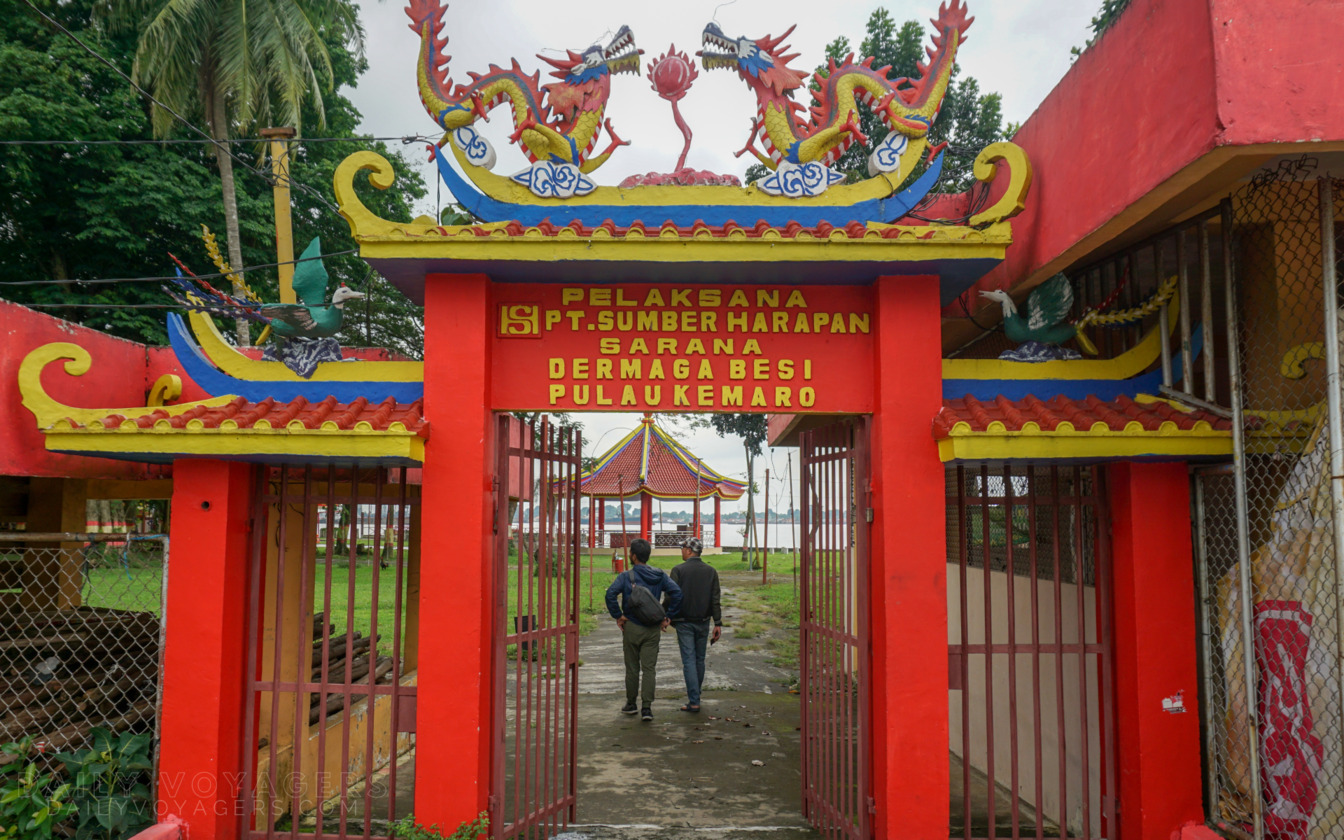 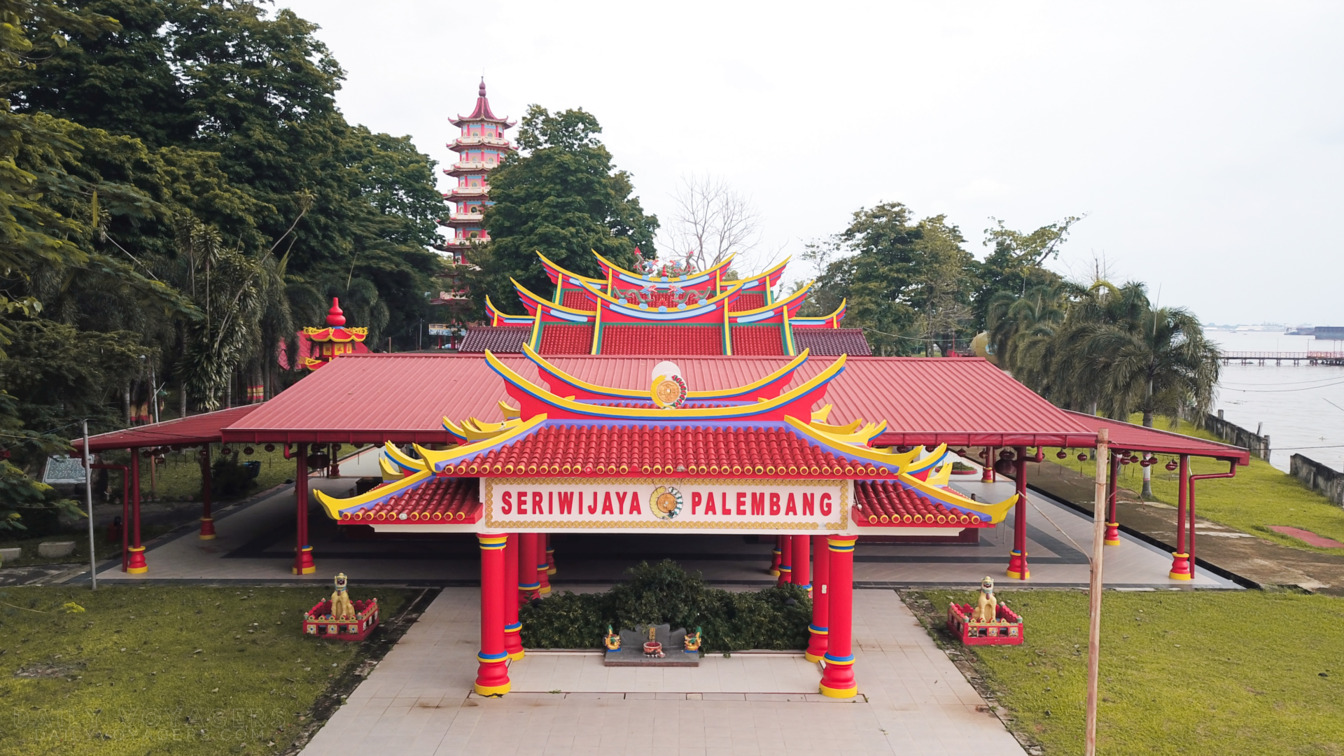 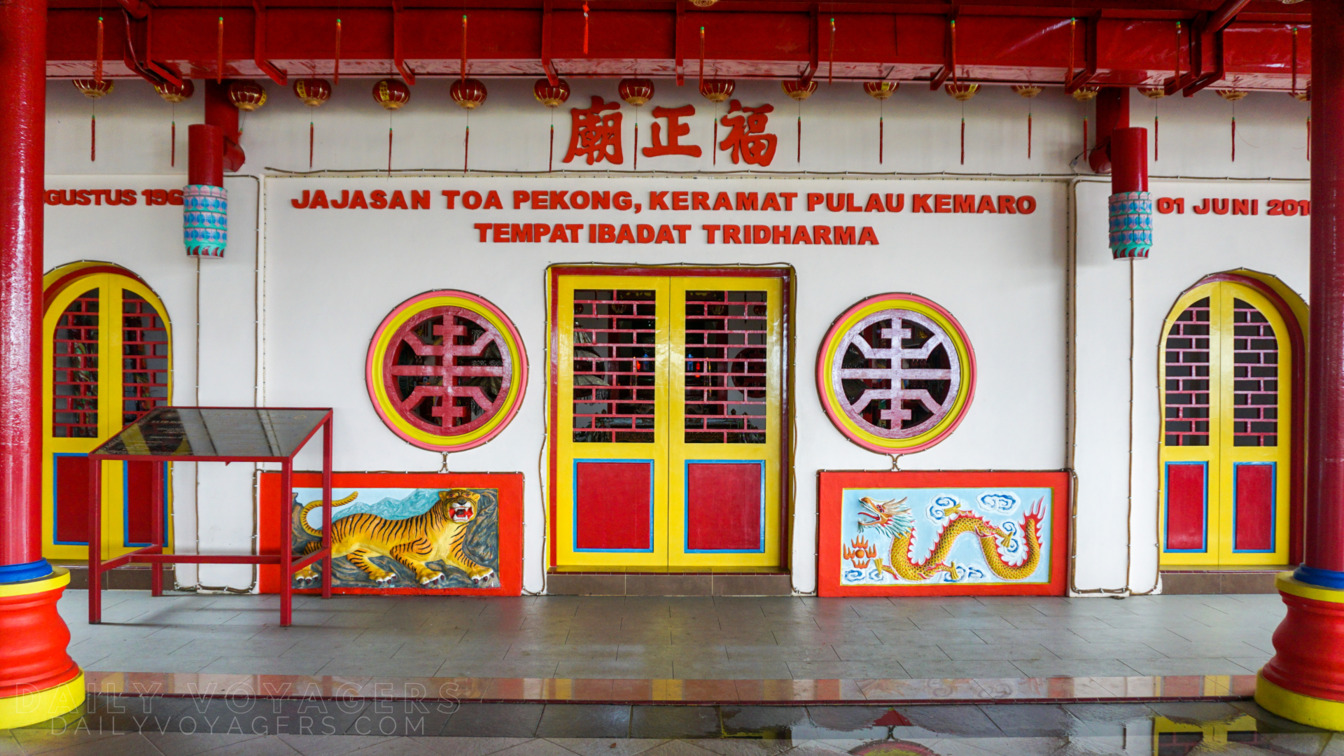 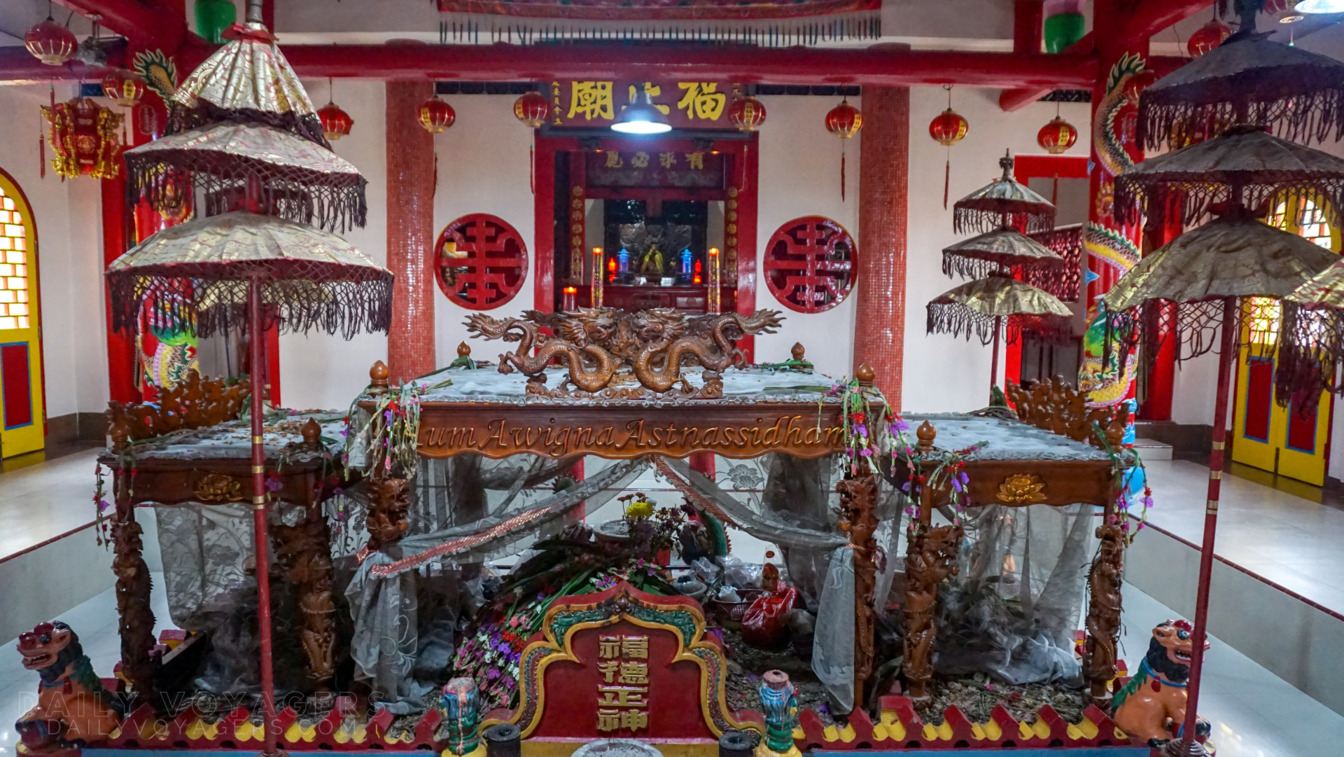 And then one day, there was crazy rich asian guy from China, Tan Bun Ann, who came to Palembang for doing any trade. Because of what he was gonna do, he decided to stay in Palembang for couple months. But before doing that, as a person who came from outside Palembang, he supposed to go to the king and telling him the purpose of his arrival in Palembang.

Sadly, the will of Tan Bun Ann wasn’t immediately granted by the king. The king gave Tan Bun Ann a condition where he had to share a half of the profit to him. If Tan Bun Ann couldn’t do that, He should leave Palembang and find another place.

Surprisingly, Tan Bun Ann undertook the terms from the king. Since then, once in a week, He must go to the castle to give what he had promised to the king. Apparently, this thing became the starting point where Tan Bun Ann saw and met the one and only beautiful princess in that castle, Siti Fatimah. From that time, Tan Bun Ann had the hots for Siti Fatimah and Siti Fatimah also felt the same way.

They finally made a relationship. Feeling that she was the one, Tan Bun Ann was more than ready to step up to a new level. Then He went to the castle to meet the king and he expressed his desire to marry Siti Fatimah. 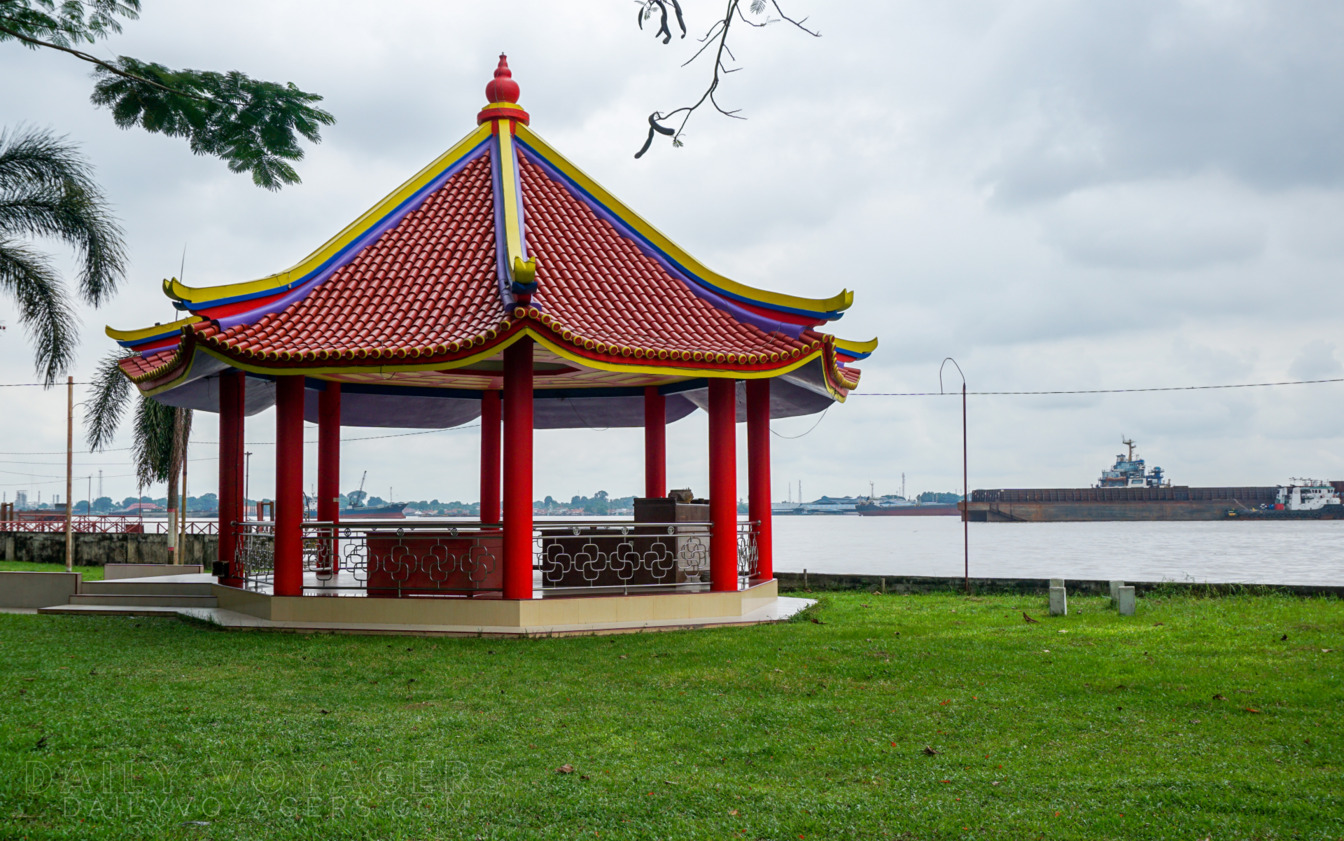 The tombs of Tan Bun Ann and Siti Fatimah 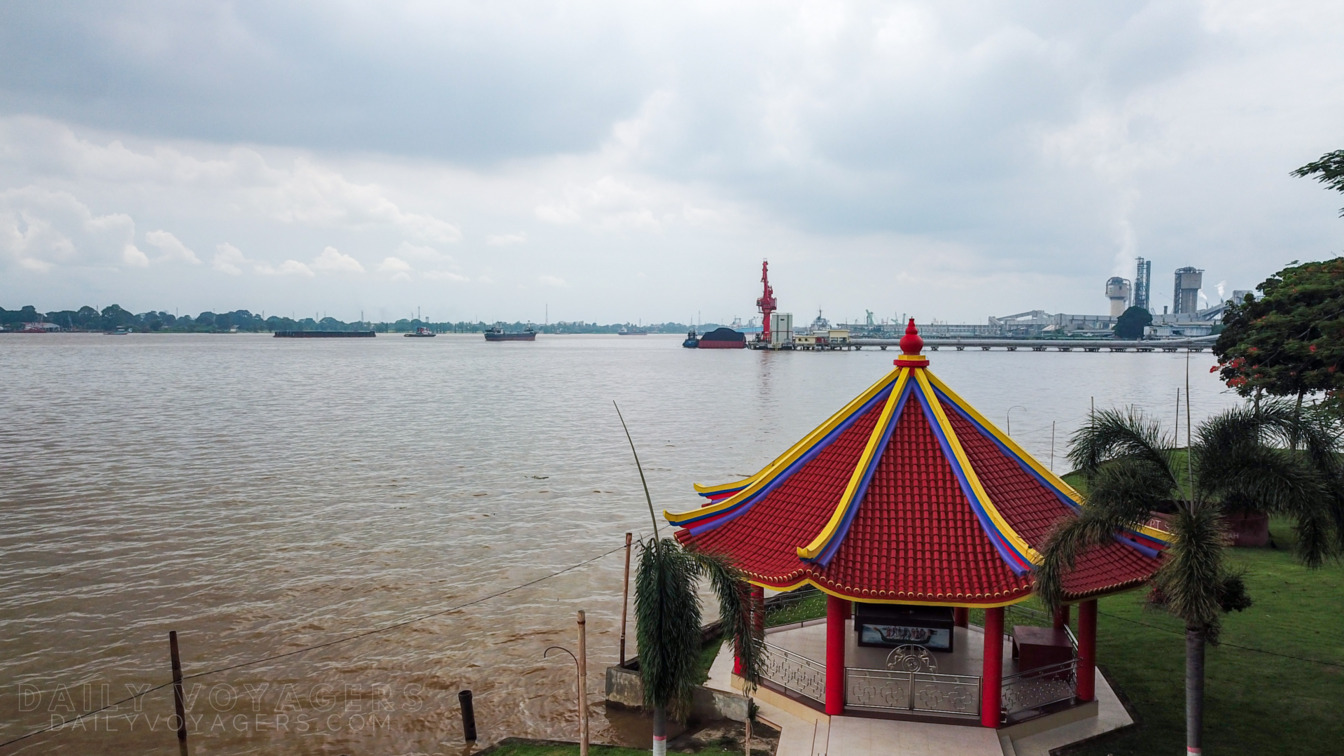 Musi River behind the tombs 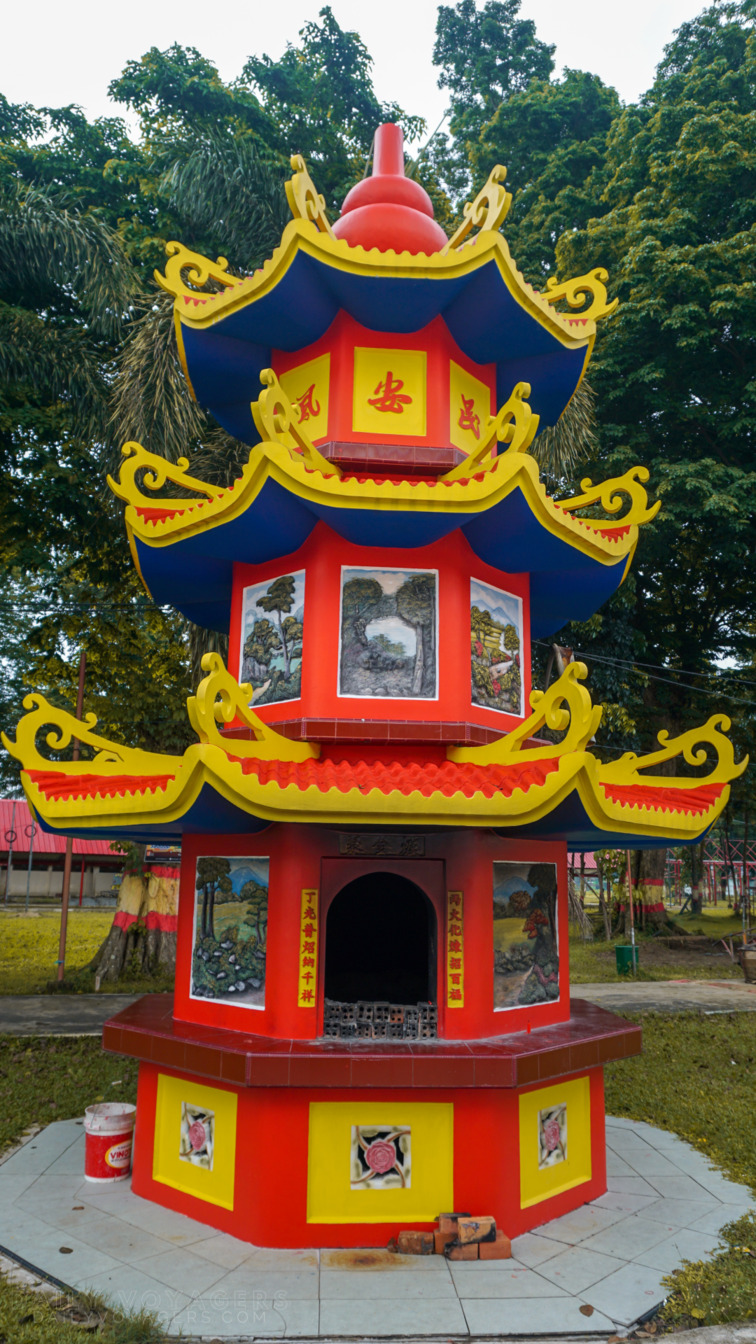 Does anyone know what it is? 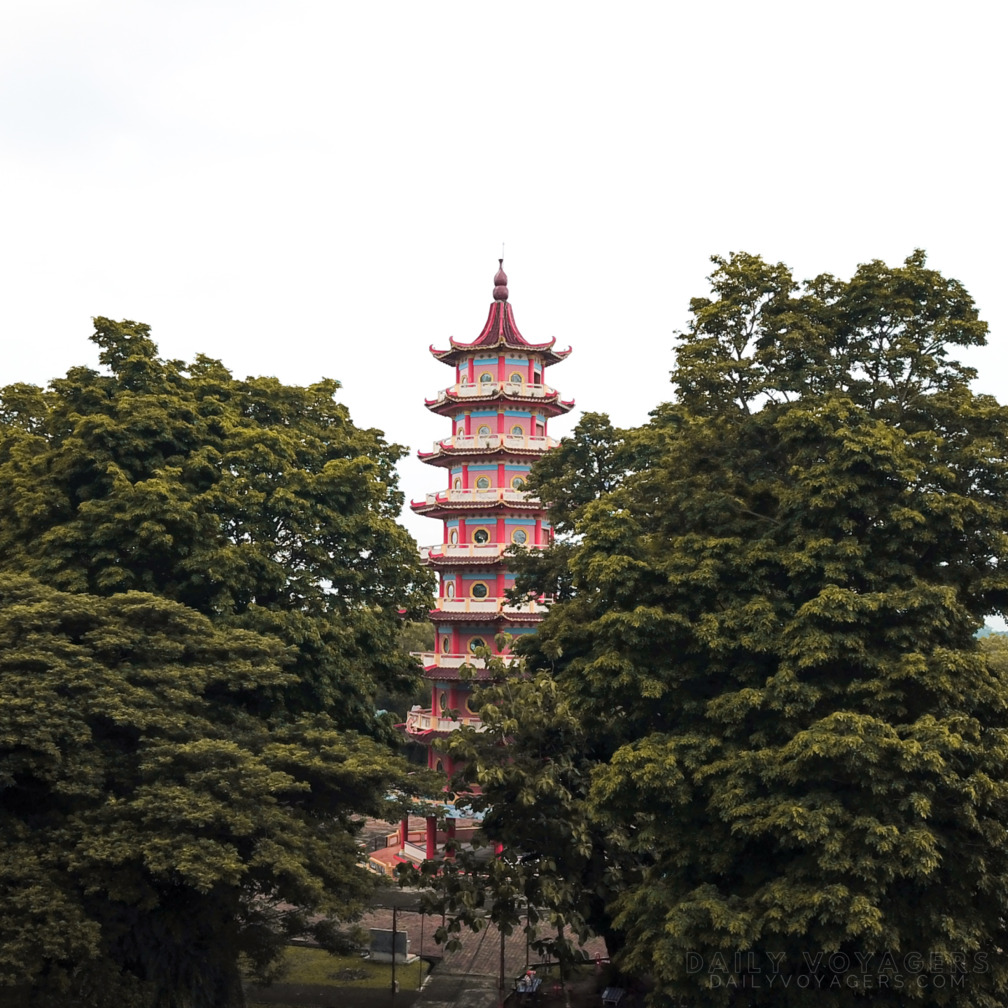 Again and again, he didn’t get what he wanted easily. The king gave him another condition. If he wanted to marry his daughter, Tan Bun Ann had to give him 9 jars that full of gold. Although it wasn’t an easy request, in the name of love, Tan Bun Ann accepted it.

Together with Siti Fatimah, Tan Bun Ann sailed back to China to meet his parents. He wanted to ask for their blessing and also told them what the king wanted from him. Hearing that, his parents provided what their son needed to marry Siti Fatimah, the 9 jars that full of gold. Long story short, Tan Bun Ann and Siti Fatimah did another voyage back to Palembang with those 9 jars on his ship.

For the security reason, the gold was covered by rotten mustard greens inside the jars. Tan Bun Ann’s father secretly did this, so Tan Bun Ann had no idea about this.

When they had arrived in Palembang, on Musi River to be exact, Tan Bun Ann checked all of the jars before giving it to the king. He was pretty shocked when he knew what was inside it. Feeling cheated and full of disappoinment, Tan Bun Ann threw all the jars to the Musi River. Accidentally, when he wanted to threw the last jar to the river, he got slipped and then the jar was dropped and broken. 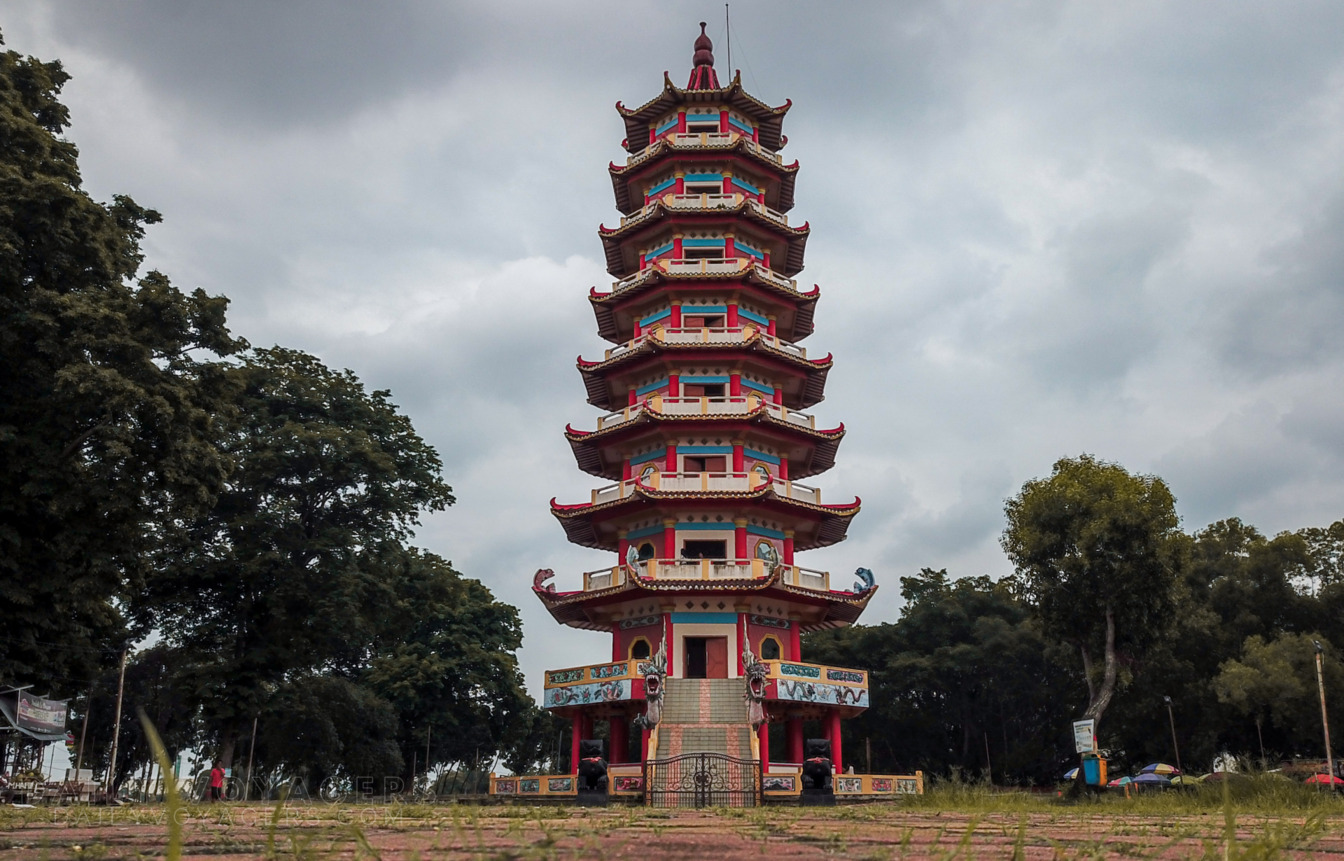 The Famous Pagoda with 9 stories 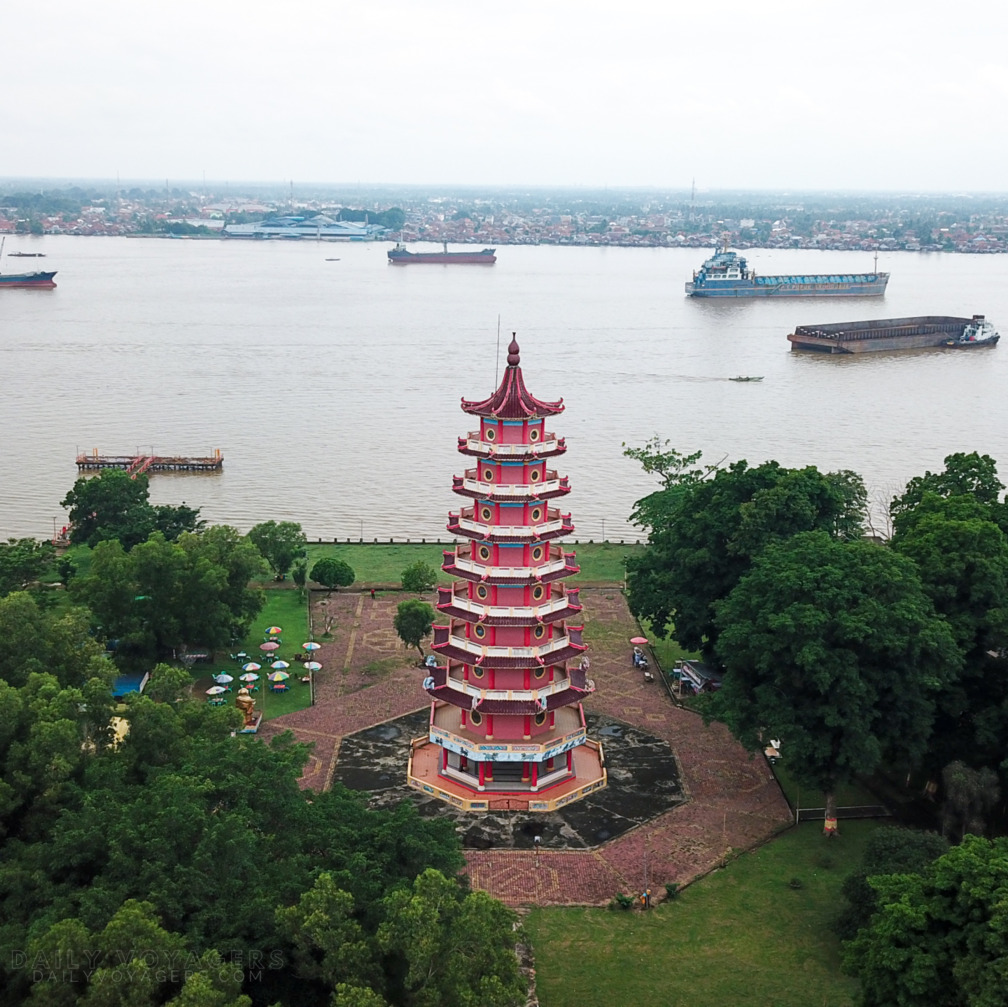 Pagoda with Musi River as the Background 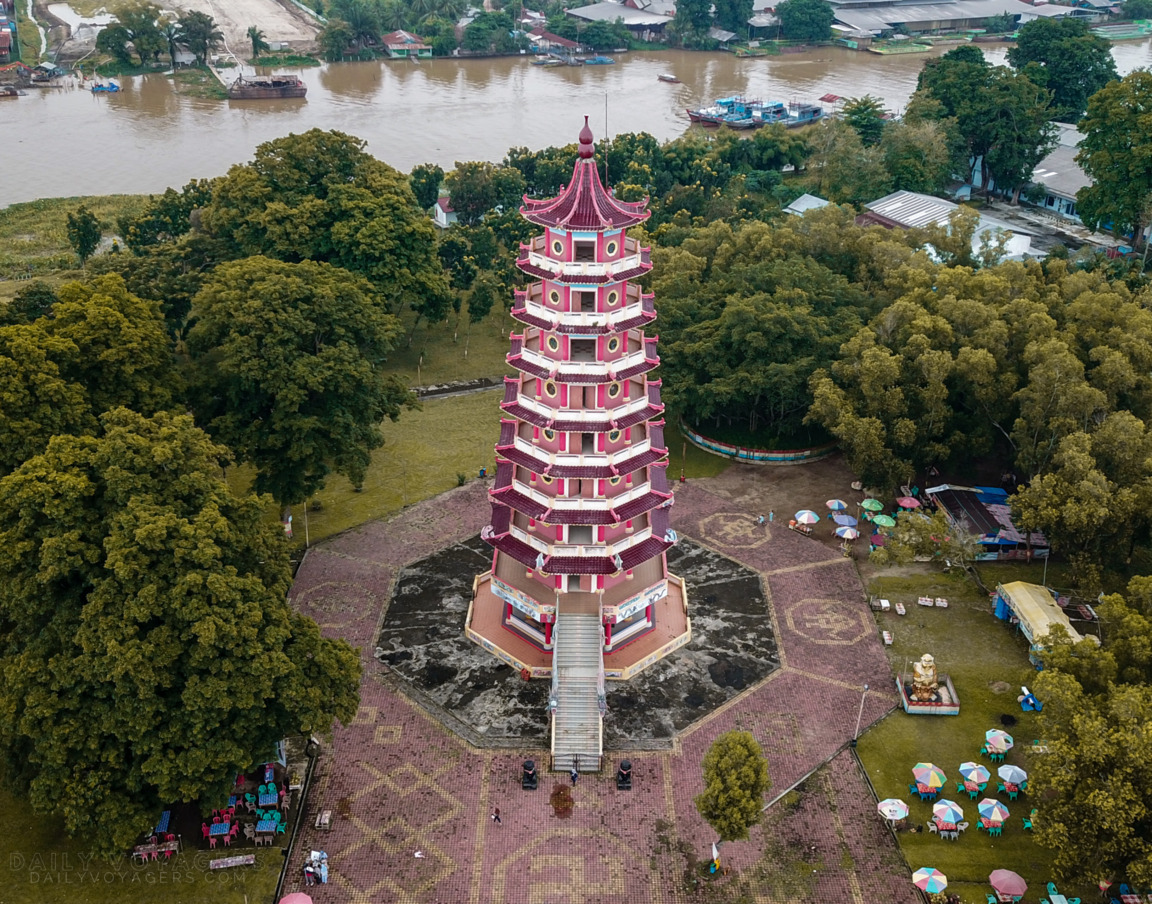 Another look of the Pagoda 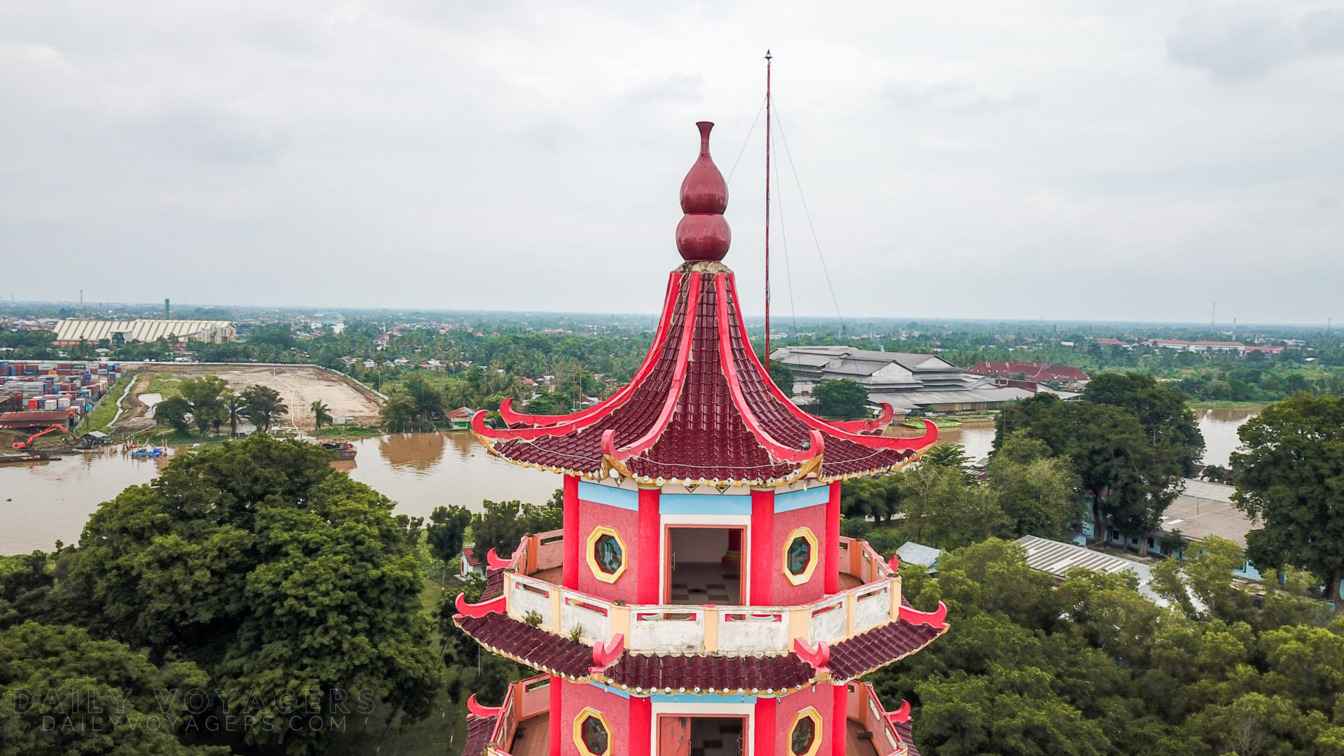 The top of Pagoda

All of the gold then burst out of the pack of the rotten mustard greens. Seeing that, Tan Bun Ann was very angry to himself. He didn’t check it correctly dan all he thought was there were only rotten mustad greens inside the jar.

Didn’t wanna feel sorry for the second time, he jumped out of the ship to reach all of the jar he had thrown up to the river. Instead of finding the gold, it became the last moment Tan Bun Ann could feel the fresh air. He sank with those 8 jars. Didn’t see any sign from his boss, one of Tan Bun Ann guards also jumped out of the ship. The result was the same, he also drowned and passed away.

Siti Fatimah, who felt very anxious, ran immediately to the edge of the ship. She still had a big hope that her prince would make it to the surface.  She had waited for so long and she couldn’t stand anymore. Then she did what Tan Bun Ann did, jumped out of the ship. As you have predicted, she ended up the same as two persons before her.

But before doing the jump, Siti Fatimah had sent a message to the other guards on the boat. The message was “if there is a land that appeared in the middle of the river, That is their grave”. 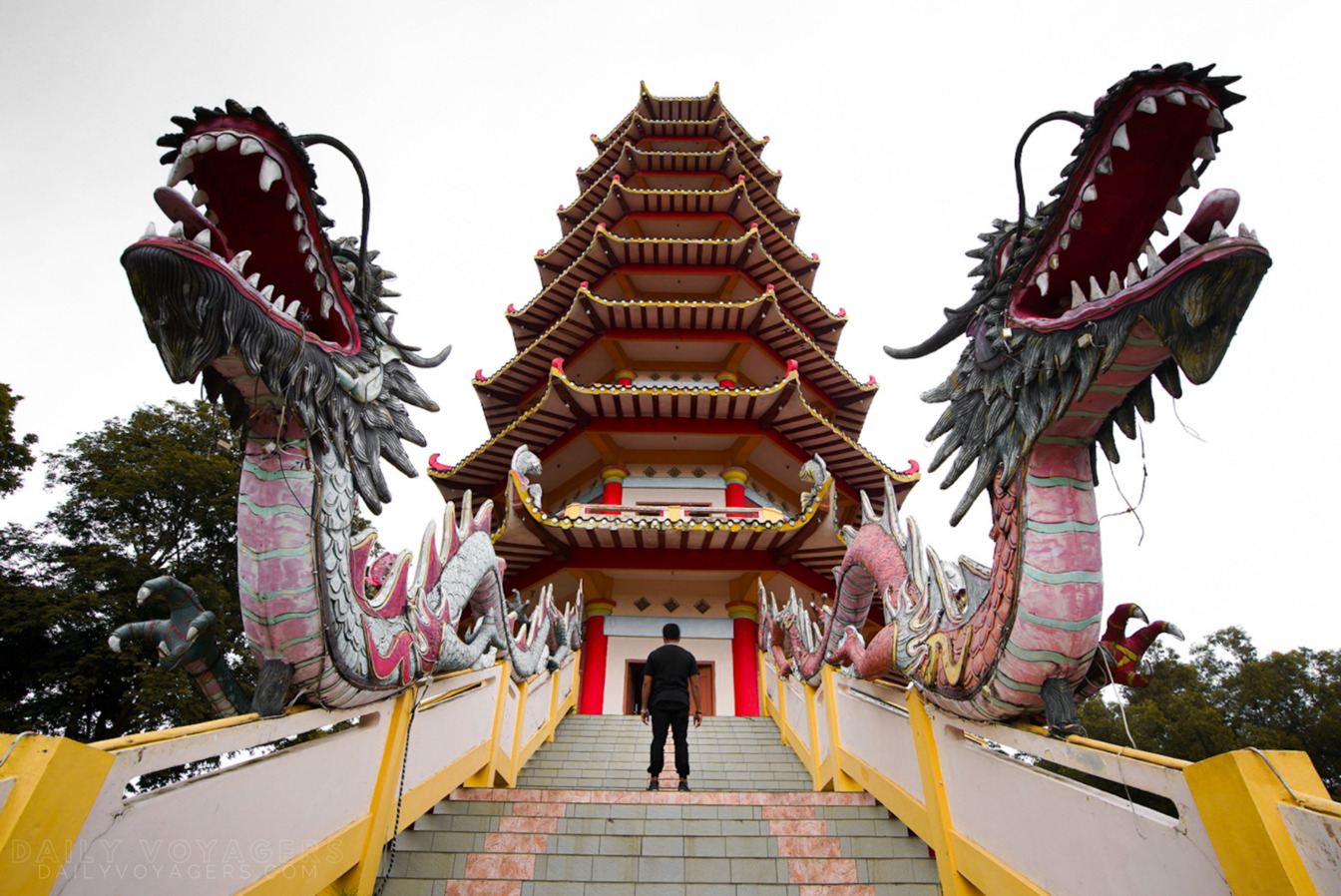 it’s me with the dragons 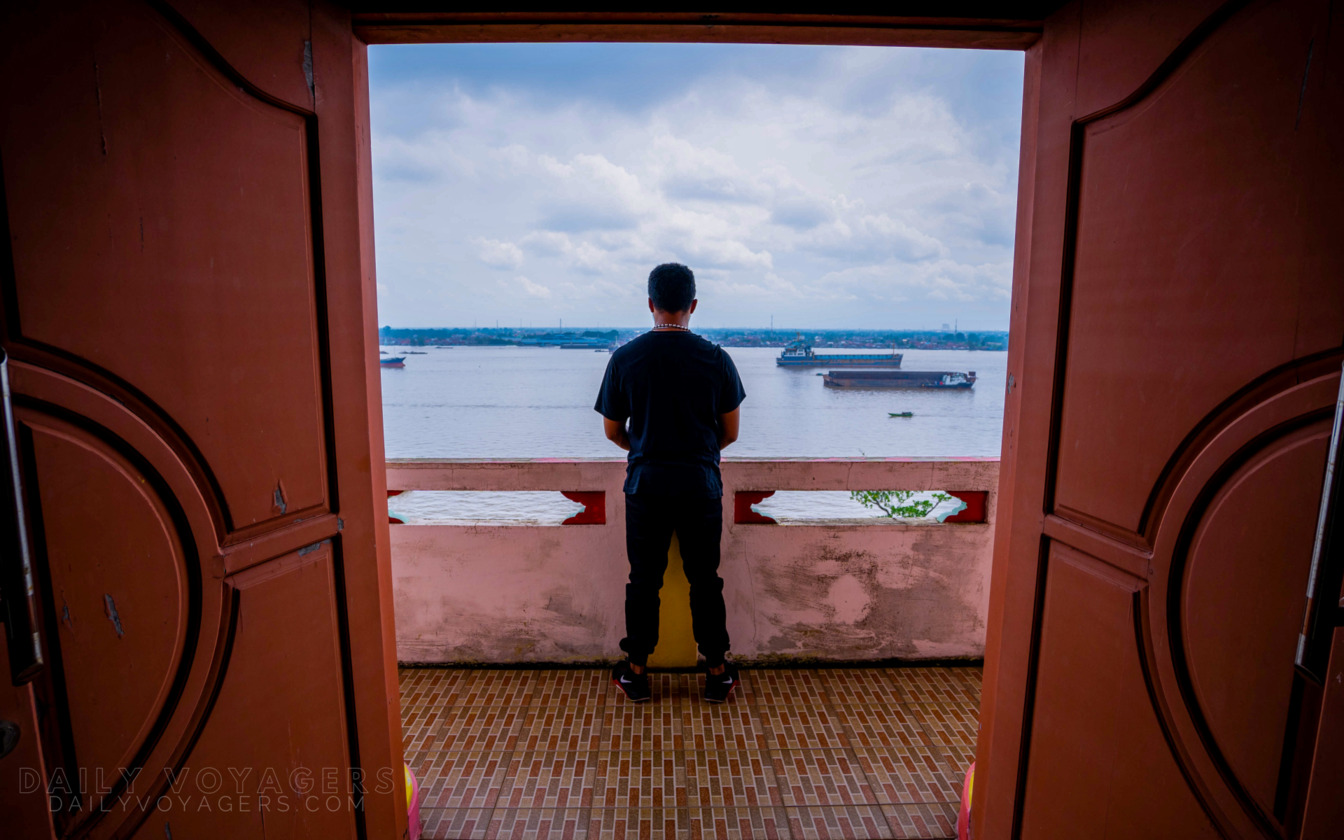 If you wondering how the look from the inside of Pagoda 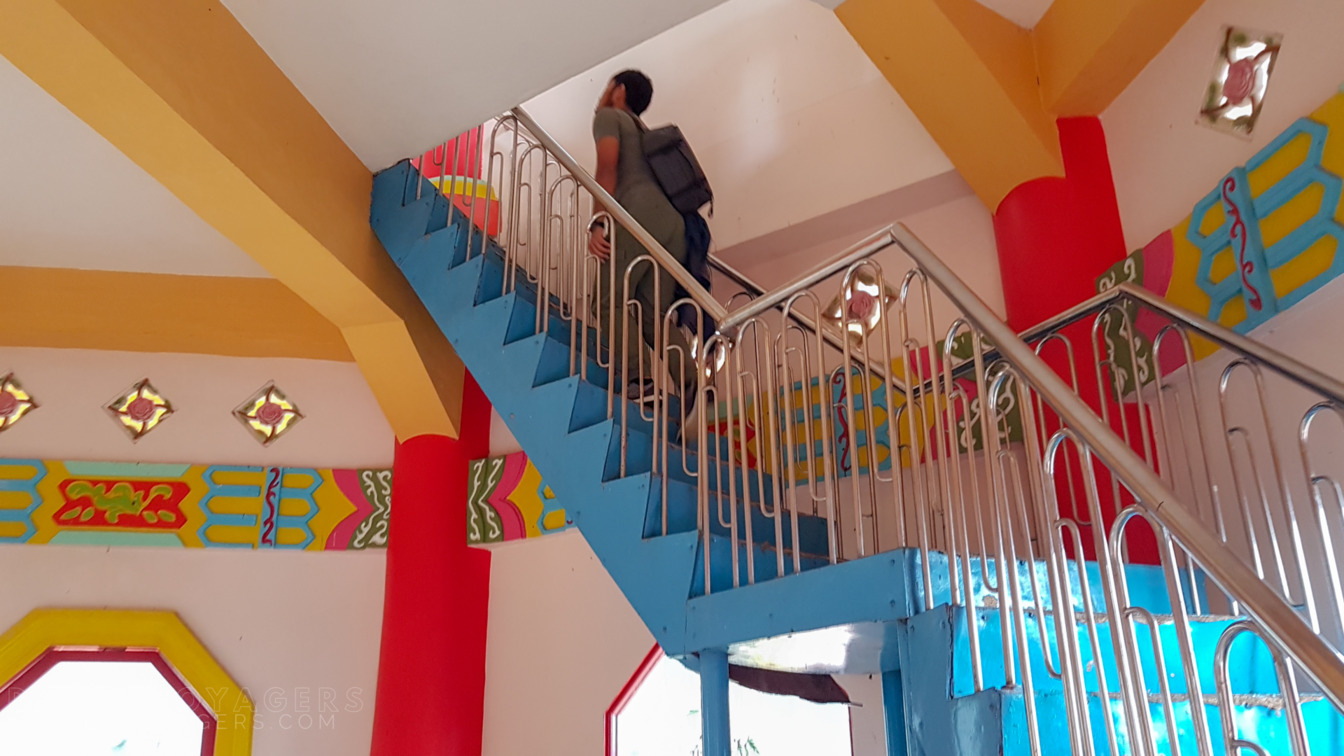 The stairs inside the Pagoda 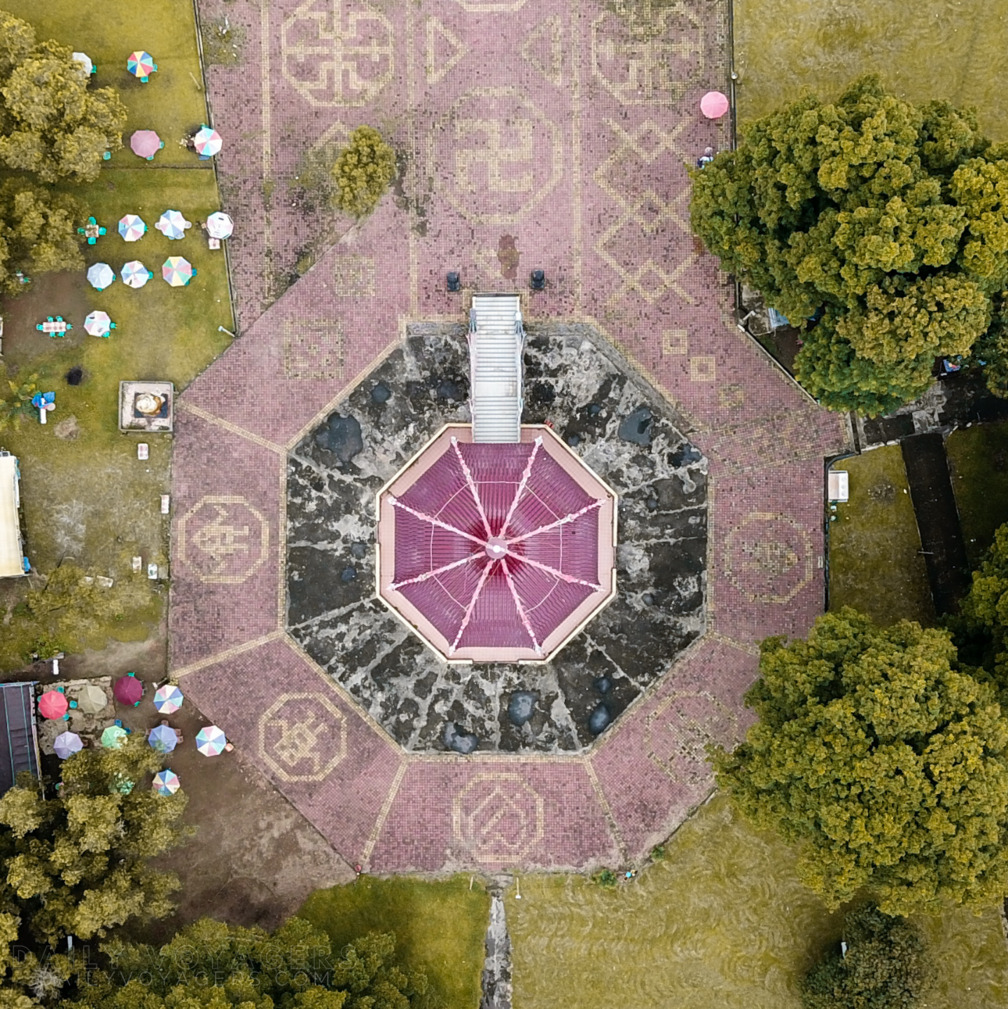 Bird view of the Pagoda

Just like what Siti Fatimah said, a couple days after their death, a small land appeared. Day by day, the land was getting bigger and bigger until it becomes a Kemaro Island like now that just 6 KM away from the iconic bridge of Palembang, Ampera Bridge.

That is the sad story behind Kemaro Island. To remember what have happened to Tan Bun Ann, his guard and Siti Fatimah, Chinese people in Palembang built a temple and tombs for them on it. So for Chinese people, Kemaro island is more than just an island. It is also a place to worship and pilgrimage.

How to Get There

Everyboat can accomodate up to 6-7 people and the cost that you pay is a round trip fee. So it will bring you from Ampera brridge and take you back on the same place.

There are two main buildings on Kemaro Island that will feast your eyes. The first one is nine stories Pagoda built on 2006 and the second one is Kuan Im Temple that has been there since 1962.